Christopher Bird, in his book, The Divining Hand, tells of a miner and diviner of metals who would dowse with his arm outstretched and fist clenched. His arm would shake when near a vein of metal, and his whole body shook when he was directly over it. The miner was asked why he does not shake and vibrate when he is working in the mine and next to the vein all the time. He answered:

If I do not ‘orient’ my thoughts specifically to finding a vein of ore, I get no reaction when I cross over a vein or work near one. 1) Bird, Christopher, The Divining Hand, New Age Press, Black Mountain, NC, (1079), p. 110.

A very common practice is to witch for water before a well is drilled or dug. Witching is most often done by using a forked tree branch. Many well drillers will not drill until someone has witched for water. There is a very strong belief in this practice, even within the Christian church. To suggest to people that the power in this act is of the occult, and not of science, is to ignite an argument. Those who have accepted dowsing as being scientific do not easily change their minds. It is believed that there is some physical force connecting the tree branch, the person doing the witching, and the water in the ground. The explanation as to why some people can do it and others cannot, is proclaimed to be due to differences in the electrical activity in our bodies.

These explanations are wishful thinking. The science of physics has not been able to demonstrate any of these claims. The more one studies the variety of ways of witching for water, and divining for other objects or information, the easier it is to be persuaded that there is no physical explanation for divining. For instance, some utility crews will use two copper wires bent at a right angle and held in each hand. One part of the wire held in the hand will be at 90 degrees to the
ground, the other part bent at a 90 degree angle so as to be horizontal to the ground. When a water or gas pipe is located underground, the horizontal wires will swing and cross, not dip down as is done with the tree branch.

Witching may be done with a forked stick, a strait rod, wires bent at a 90 degree angle, a plain stick held in the palms of outstretched arms, a coin resting in the palm of the hand, outstretched hands alone, or just the mind with no tools of the trade. The stick may point up or down, or it may vibrate or oscillate. The wires may turn inward or they may turn outward; they may also turn opposite each other as they are held in the hand. A wire may oscillate up and down, sideways, or in other modes of gyrations. The hand may shake; a coin in the palm may turn over. The stick may turn round and round in the palm of an outstretched hand, or be thrown clear out of the diviner’s hands. When divining with no instrument, the taste of water may be the sign that water, or whatever is being dowsed, is beneath the dowser. The diviner chooses what method he wants to use, and before he divines he decides the reaction that is to occur with his instrument.

Witching may be done from a map thousands of miles from the area of interest. It may be done for any substance, fluid, solid, mineral, or water. It can be done for any object on earth. It may even be done for an underground tunnel. Bird, in his book, The Divining Hand, tells of the use of the divining rod by Marines in Vietnam to find tunnels. Divining by map was used to locate prisoners of war, and the location of Viet Cong prisons. Any question under the sun could be asked, and would receive an answer as long as it involved a yes or no response. A gentleman once came to my office for treatment of a very swollen and painful shoulder. After injection with medication it promptly healed. He later returned and told me I had ruined his “bobbing arm.” I asked what a bobbing arm was. He stated that when the arm was very tender he was able to more accurately sense the pull on the wire he would use in witching for water. Later he came to my home to demonstrate to me his technique for witching.

He took a bucket and turned it upside down using it for a stool. Sitting on the bucket he took a strong, stiff wire about a meter long, and bent a coil on the end to hold a light bulb. A bulb was placed in the coiled wire, and the wire was held on his knee, pointing out in front of his knee about 25 inches, with the light bulb on the end. He held a pencil in the other hand and placed a tablet on the free knee. The wire began to bend up and down causing the light bulb to rise and fall 8–10 inches. He would count the number of times it would flex until it stopped. When it stopped the wire began to bend back and forth in horizontal moves. After 10-12 moves this way, the wire would stop and begin to bend up and down again. He counted the up and down moves, and he also counted the horizontal moves, recording them. The up and down moves represented one foot for each bend, and the horizontal moves represented the volume of water at that depth. The distance was thus calculated to each level where water would be found, and an estimate given for the volume at the different levels. I asked him why it was that in America each bob of the wire is counted as a foot and in Europe each bob of the wire is calculated as one meter? He had no answer. 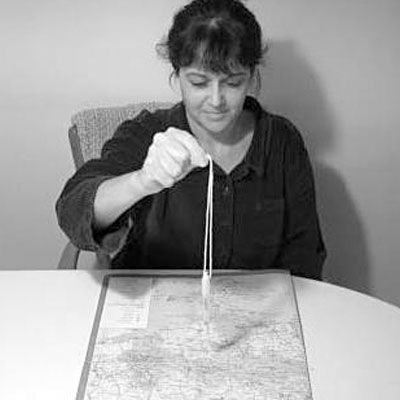 Later I found the answer to the question. A relative came to visit whom I learned belonged to a dowsing club of “water witches.” I asked him the same question, and this is his answer:

That is no problem, a person doing the bobbing just determines in his mind what measurements he is going to use before he starts.

Many who are involved in divination for metal or water continue their attempts to find some scientific association or answer so that dowsing will be accepted by the scientific world. However, there seems to be no common ground with science.