The Healing of the Character

THE HEALING OF THE CHARACTER

True healing is more than merely treating diseases. It is the complete restoration of health and involves body, mind and spirit. We often use 1 Thessalonians 5:23 to demonstrate the biblical position that body, mind and spirit are a unity. “May God himself, the God of peace, sanctify you through and through. May your whole spirit, soul and body be kept blameless at the coming of our Lord Jesus Christ.” However, even Christians often forget that the development of a holy character and sanctification are closely related to our diet and other lifestyle habits.

The Laws of Life

Let’s review briefly how man was created. In Genesis 2:7 we read that God used the elements of the earth (carbon, oxygen, hydrogen, iron, calcium, etc.) as the constituents of man. Obviously these elements are subjected to physical laws. The atoms combine to form substances like sugars, fats, proteins, enzymes, and many more, all regulated by chemical laws. These substances form cells and tissues like the muscles, bones, skin, etc., that in turn obey biological laws. Then come the organs and systems, the kidneys, the respiratory system and others, all functioning according to physiological laws. The mind follows psychological laws. Finally, the human being became the “temple of the Holy Spirit” (1 Corinthians 6:19-20) who himself obeys the moral laws of God. Man was created perfectly happy, healthy and holy. This state should continue throughout eternity.

All these laws are necessary to secure the perfect functioning of the human machinery. “The laws of nature, being the laws of God, are designed for our good; obedience to them promotes happiness in this life, and aids in the preparation for the life to come.” (Ministry of Healing, p. 146)

Created in the Image of God

The most wonderful and astounding fact is that “God created man in his own image”. (Genesis 1:27) This is far above our understand-ing and should fill us with admiration and awe.

“It was a wonderful thing for God to create man, to make mind. He created him that every faculty might be the faculty of the divine mind. The glory of God is to be revealed in the creating of man in God’s image, and in his redemption.” (Healthful Living, p. 12)

The highest faculties of the mind, the moral understanding, discrimination, judgement, self-control, willpower and decision making have their seat in the frontal lobe of the brain. Unfortunately, sin marred the image of God, the holy character of God in our mind. God’s plan of salvation has the purpose to restore His image in us.

The apostle Paul urges us to think and feel like our model Jesus. “Let this mind be in you which was also in Christ Jesus.” (Philippians 2:5)

Jesus himself emphasized the need for remaining in intimate contact with Him by saying, “I am the vine, you are the branches. He who

Ellen G. White explains what it means to bear fruit. “The object of the Christian life is fruit bearing – the reproduction of Christ’s character in the believer.” (Christ’s Object Lessons, p. 67)
This is the work of the Holy Spirit in our mind: “But the fruit of the Spirit is love, joy, peace, patience, kindness, goodness, faithfulness, gentleness and self-control.” (Galatians 5:22) And “When the character of Christ shall be perfectly reproduced in His people, then He will come to claim them as His own.” (Christ’s Object Lessons, p. 69)

The apostle John had a vision seeing the redeemed on the new earth. He describes those with a restored holy character, using the following self-explaining picture: “Then I looked, and there before me was the Lamb, standing on Mount Zion, and with him 144,000 who had his name and his Father’s name written on their foreheads.” (Revelation 14:1)

One dictionary defines character as “The totality of the fundamental psychic and moral characteristics of a person, that manifest in the way he behaves, in his ideas and actions.” (Romanian Dictionary, 1975)

Observe that the character is expressed by thoughts, actions and behavior. Jesus said, “You will know them by their fruits.” (Matthew 7:16)

The Encyclopedia Britannica gives more details, explaining that the character has two main components. The intellectual part, represented by the thoughts, is the guiding force, and the emotional component, represented by the feelings, is the driving force. Both together determine the behavior. Interestingly, Ellen G. White said the same thing: “The thoughts and feelings combined make up the moral character.” (Testimonies, vol. 5, p. 310)

Now we can understand the connection between loving God and keeping His commandments. Jesus said, “If you love Me, keep My commandments.” (John 14:15) The commandments do not save anybody. They show the way to go and must be understood with the intellect. Than the love is needed as the driving force, “For the love of Christ compels us.” (2 Corinthians 5:14)

How is the Character Formed?

A baby is not born with a finished character. It is born with inherited tendencies and inclinations that must be developed or corrected throughout life. “Character does not come by chance. It is not determined by one outburst of temper, one step in the wrong direction. It is the repetition of the act that causes it to become habit, and molds the character either for good or for evil. Right

characters can be formed only by persevering, untiring effort, by improving every intrusted talent and capability to the glory of God.” (Messages to Young People, p. 163)

Notice the progressive steps: At the beginning are the thoughts and feelings. These are then analyzed and synthesized into ideas. A decision is taken and using the will it comes to an action. Repeated actions produce habits and the sum of the habits constitutes the character.

God’s plan of salvation includes the restoration of a holy character – the image of God in man. “The forgiveness of sins is not the sole result of the death of Jesus. He made the infinite sacrifice, not only that sin might be removed, but that human nature might be restored, rebeautified, reconstructed from its ruins, and made fit for the presence of God.” (Testimonies vol. 5, p. 537)

“Therefore if any man be in Christ, he is a new creature: old things are passed away; behold, all things are become new.” (2 Corinthians 5:17)

“A character formed according to the divine likeness is the only treasure that we can take from this world to the next.” (Christ’s Object Lessons, p. 332)

The Anatomy of the Character

God created us with (at least) five senses for contact with our environment. They are sometimes called the “avenues of the soul” because the impressions received by the senses generate the thoughts and feelings that form the basis for our ideas, actions and behavior.

“Those who would not fall a prey to Satan’s devices must guard well the avenues of the soul; they must avoid reading, seeing, or hearing that which will suggest impure thoughts. The mind must not be left to dwell at random upon every subject that the enemy of souls may suggest. … You will have to become a faithful sentinel over your eyes, ears, and all your senses if you would control your mind and prevent vain and corrupt thoughts from staining your soul.” (Mind, Character and Personality, vol. 1, p. 228)

The sensorial organs are made up by special histological structures capable to transform different stimuli into small electrical currents. These currents are conducted by the sensorial nerves to their corresponding area of the brain where they are interpreted and elaborated. For example, the light coming into our eyes through the cornea and lens is projected unto the retina where the sensorial nerves produce electrical currents. These are conducted via several “stations” to their final destination, the visual area of the posterior lobe of the brain, where they produce a colorful, three-dimensional virtual “image”. By way of different nervous connections these images are interpreted in the frontal lobe. Necessary adjustments in respiration, cardiac rhythm or muscular actions are carried out in other centers.

The Health of the Brain

The main functions of the frontal lobe are:

Our behavior and character building depends on these four functions or faculties. In other words, our behavior at home, in the school, at the work place, or in any other situation, our ability of stress management, etc., all depend on a healthy brain, especially the frontal lobe. In order to be complete we should include here the immune system and all other vital functions because all of them depend on the healthy function of the brain and related centers.

Dr. Mervyn Hardinge, founder and director emeritus of the School of Public Health at the Loma Linda University, describes the factors that are detrimental to the function of the brain:

It can easily be seen that the entire lifestyle, fresh air, regular rest, nutrition, abstention from poisons, and the input through our senses, all affect the healthy functions of our brain and must be carefully taken into consideration. Our spiritual growth is carried out using the same anatomical structures and physiological mechanisms under the guidance of the Holy Spirit.

“The brain nerves which communicate with the entire system are the only medium through which Heaven can communicate to man and affect his inmost life. Whatever disturbs the circulation of the electric currents in the nervous system lessens the strength of the vital powers, and the result is a deadening of the sensibilities of the mind.” (Temperance, p. 13)

“The body is the only medium through which the mind and the soul are developed for the upbuilding of character. Hence it is that the adversary of souls directs his temptations to the enfeebling and degrading of the physical powers. His success here means the surrender to evil of the whole being. The tendencies of our physical nature, unless under the dominion of a higher power, will surely work ruin and death.” (Ministry of Healing, p. 130)

“The health of the body is to be regarded as essential for growth in grace and the acquirement of an even temper. If the stomach is not properly cared for, the formation of an upright, moral character will be hindered. The brain and nerves are in sympathy with the stomach. Erroneous eating and drinking result in erroneous thinking and acting.” (Testimonies, vol. 9, p. 159)

“There is an intimate relation between the mind and the body; they react upon each other. In order, then, to reach a high standard of moral and intellectual attainment, and to secure a strong, well-balanced character, the laws that control our physical being must be heeded; both the mental and the physical powers must be developed. Such a training will produce men of strength and solidity of character, of keen perception and sound judgment, – men who will be an honor to God and a blessing to the world.” (Ellen G. White, Pacific Health Journal, February 1, 1902)

“Every man has the opportunity, to a great extent, of making himself whatever he chooses to be. The blessings of this life, and also of the immortal state, are within his reach. He may build up a character of solid worth, gaining new strength at every step. His faculties will improve by use; the more wisdom he gains, the greater will be his capacity for acquiring.

“On the other hand, he may allow his powers to rust out for want of use, or to be perverted through evil habits, lack of self-control, or moral and religious stamina. His course then tends downward; he is disobedient to the law of God and to the laws of health. … Dissipation, disease, and death follow. This is the history of many lives that might have been useful in the cause of God and humanity.” (Counsels on Diet and Foods, p. 15) 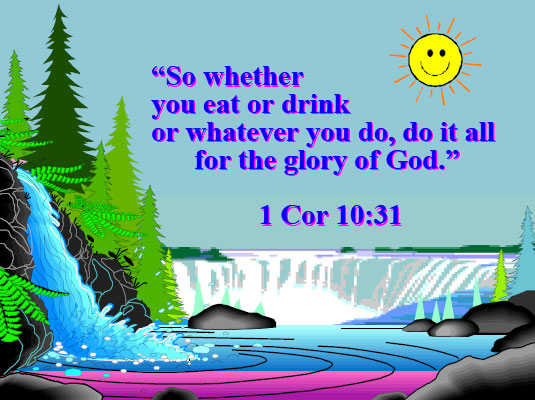