An alternative method of making a medical diagnosis for the present, and predicting disorders in the future, is iridology. This is a divination method which involves examining the iris of the eye, and inspecting the color, texture, and location of various pigment flecks in the iris. The practitioners say they can detect imbalances in the body’s system which in turn can be treated with vitamins, minerals, herbs, and in other ways. Iridology is practiced around the world. However, the technique is rarely accepted by a conventional medical doctor. Some chiropractors and naturopaths utilize it, and there are many non-medical people who present themselves as iridologists.

Modern iridology had its start from Ignatz von Peczely, a Hungarian physician, who, in his youth, had broken a leg of an owl and noticed a black stripe in the lower part of the owl’s eye. He theorized that the broken leg caused the black stripe. However, this does not happen.

The right side of the body is said to be represented by the right iris and the left side by the left iris. The iris is divided into ninety sections with each section supposedly representing relationship to a specific part of the body. Disease or disturbances in those areas of the body are said to present changes in the iris which can be seen by the skilled examiner. Jessica Maxwell, in her book The Eye–Body Connection, claims that:

The basis for iridology is the neuro-optic reflex, an intimate marriage of the estimated half million filaments of the iris with the cervical ganglia of the sympathetic nervous system. The neuro-optic reflex turns the iris into an ‘organic etch-a- sketch’ that monitors impressions from all over the body as they come in. 1) Maxwell, Jessica, What Your Eyes Tell You About Your Health, Esquire, January (1978). Reported in Ankerberg, Op. cit., p. 340. 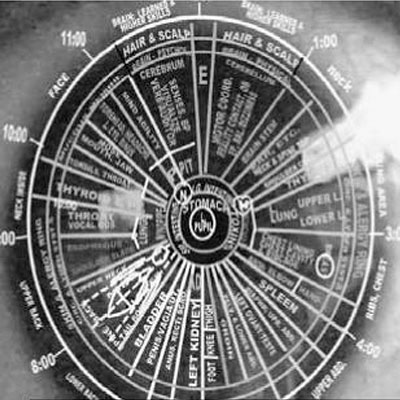 Ophthalmologists have not found the above statement to be true. Only a rare optometrist will accept it. The technique has been scientifically tested a number of times and each time it has failed to support the claims of its adherents. The iridologist might make claims as to the accuracy and scientific basis for iridology, such as that it is based upon a neuro-optic reflex, a connection between the optic nerve and the iris and the rest of the body. The problem here is that the signals of the optic nerve only go to the brain. There is no signal traveling from the brain back up the optic nerve to the eye. In spite of the lack of scientific proof for a basis by which it can work, or of true accuracy in its use, iridology is still very popular.

Iridology can be traced to ancient Chinese astrological practices, however according to Dr. Carter; the first precursor published on iridology was Phillippus Meyen’s Chiromatica Medica. (Ger-many, 1670). 2) Ankerberg, John, Weldon, John, Can You Trust Your Doctor?, Wolgemuth and Hyatt, Brentwood, TN, (1991), p. 341.

Iridology was introduced to America in 1904. The most recent leader of iridology in America was the late naturopath, Bernard Jensen (1908-2001)…..Jensen is not a scientist but is a New Age Healer, a fact revealed in his various works, such as Iridology; Science and Practice in the Healing Arts. In this text, he discusses his belief in reincarnation, astral travel, psychic development and other occultic practices and philosophies. 3) Ibid., pp. 343–344.

Iridology can be used in conjunction with any other form of analysis and diagnosis. 4) Ibid.

The iridologist believes he can:

The same belief says that the iris of the eye can show acute, subacute, chronic, and destructive stages in the body.

Many other factors are also revealed such as organic and functional changes…It foretells the development of many conditions long before they have manifested into disease symptoms. 6) Ibid,..

We are told that:

No other science tells so accurately the progress from acute to chronic states. Only iridology is capable of directing attention to impending conditions; only iridology reveals and evaluates in-herent weaknesses. 7) Ibid.,..

In using iridology you need ask no questions yet you can tell where pain is, what stage it is in, how it got there, and when it is gone. 8) Ibid..,..

There is no truth to these claims, as emphasized by the following test of iridology. In 1979, Bernard Jensen and two other practitioners of iridology were given 143 photographs of irises of patient’s eyes to view and determine which individuals had kidney impairment. (48 had a diagnosis of kidney disease as revealed by standard blood tests; the rest had no kidney disorder.) These iridologists were not able to separate the diseased from the normal. One iridologist had picked out 88 % of normal patients as having kidney disease; another examiner found that 74% percent of those patients that had severe kidney disease were identified as normal. This test was reported in the Journal of American Medical Association, 242, 1385-1387, 1979.

The British Medical Journal 297:1578-1581, 1988, carried an article of a test given to five leading Dutch iridologists. They received a stereo color slide of the right iris of 78 people, half of whom had a diagnosis of gallbladder disease, and the other half were free of any disorder. The five practitioners were not able to differentiate the diseased from the normal, and were not able to agree among themselves as to who were diseased or not. This typifies the results of many tests given to iridologists.

Another problem that exists in iridology is that there are no standards in the charts used to represent the eye, from which the diagnosis of the health condition of the person being examined is made. The following quote presents this problem.

For example, there are some twenty different iridology charts that a practitioner may choose from in his practice. 9) Ankerberg, op. cit., pp. 346–7.

Does iridology have an astrological basis for existence? Does it have its base in the “universal energy” concept? Like much of New Age medicine, iridology makes use of the concept of mystical energy. In fact, the pupil of the eye is held to be a repository of sorts for the body’s energy, according to many iridologists.

Most iridologists agree that the integrity of the body’s energy is reflected by the quality of energy in this (pupil) hub, or core. 10) Berkeley Holistic Health Center, The Holistic Health Hand Book, Berkley, California Press; Berkley, CA, (1978), p. 159.

As to astrology, iridologist Brint sums it up this way.

From an Eastern point of view, the eye may be viewed as a Mandala… The Mandala links the microcosm and the macrocosm… Through the Mandala man may be projected into the universe and the universe into man… In iridology, the macrocosm and the microcosm are linked in our eyes… Iridology may be summed up as the observation of the change that arises from the interplay of various levels of consciousness and results in one’s unique evolution into greater (occult) truth and light. 11) Ibid., pp. 155, 162