Qi gong is the forerunner of traditional Chinese medicine, since qi/chi, the subtle breath or life energy, is at the heart of everything. 1) McNamara, Sheila, Traditional Chinese Medicine, Basic Books, (Persus Books) New York,NY, (1996) p. 130

Qi gong or (Chi Kung) means manipulation of vital energy (psychic energy), and is also the precursor of martial arts that have been practiced in China for thousands of years. Qi is comprised of yin and yang, each contributing to health when in proper balance. Gong refers to achieving the ultimate balance of the two parts. Qi gong is a variety of physical exercises and actions practiced to facilitate the harmony of yin and yang. If one is able to superbly balance these parts of qi, he will be able to accomplish extraordinary feats with his powers and will be a master of qi gong.

Qi gong is a system of body/mind discipline of traditional Chinese medicine and is the foundation of martial arts, which are practiced under various names, such as ninjutsu, tai chi chuan, ikido, tae kwon do, judo, kenpo, karate, etc.

Fundamentally, qi gong is a method of meditation exercise aimed at the cultivation of physical and spiritual perfection. 2) Ibid., pp. 127–128.

Meditational forms involve stillness, standing, sitting, or lying motionless. More physically active forms will involve breathing exercises in order to inhale the “vital essence of life.” Physical activity is frequently a slow, smooth, and rounded movement. Concentrating on breath and emptying the mind are very important. These activities are “always with a spiritual element”. 3)Ibid., p. 128.

The exercises can be performed alone, or by a qi gong Master for another person, which involves exercising around the other person’s body, without making any physical contact. This is supposed to activate the qi within another’s body so that the person can be brought into the qi gong state. Balancing the qi is the objective, for too little qi is equivalent to illness. When people do their own exercises, or when masters do the exercises for them, qi, it is said, can be directed towards different areas within the body.

One of its main precepts concerns finding the center of the body, to attain perfect balance as a prerequisite to health. Students will be taught to visualize the soles of their feet reaching hundreds of yards deep down into the earth, or a rod passing down their spine via entering of their head and penetrating deep into the ground. Once they achieve perfect balance, no one will be able to knock them off-balance. It proves that the qi is perfectly centered, neither too weak in one part of the body nor too strong in another. 4) Ibid., p. 128. 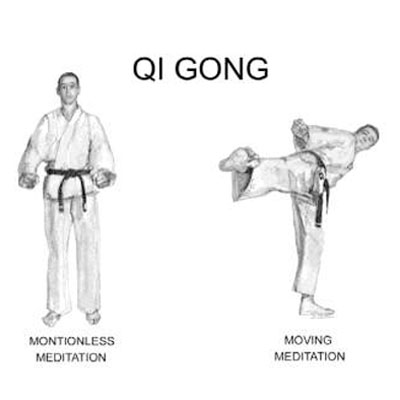