I have had recent inquiries from network members concerning the subject of essential oils. I responded with brief answers. It may be time for a full dispatch to be dedicated to this subject. In past years in my seminars I did not cover this subject as other healing practices with spiritualistic trappings were more prominent. Through the last 5 or so years I have had to reconsider my priorities in choosing subjects to share in seminars exposing spiritualism in health and healing, as interest in and use of essential oils and aromatherapy has exploded in North America and in the Seventh-day Adventist Church. This was impressed on me recently as I sat at a table for a potluck lunch in a conservative SDA church, 3 out of four ladies at the table had “bought in” to the use of essential oils.

One reason I shied from this subject is that it is rather difficult to make clear the concern we should have of the promotion of essential oil use. It is one of the most deceptive disciplines in the field of health and healing. Many have interest in these oils considering them to be an advanced aspect of herbology. Their use seems to fit into the “nature or natural healing” methods popular today. You may be asking the question: “Is Doctor Noyes unbalanced in his judgement and sees everything as tainted with spiritualism?” Believe me, I have asked that question a thousand times myself, yet when I consider all the information available on these subjects, my answer is “I do not believe so.”

I could simply send out over the network from the book Exposing Spiritualistic Practices in Healing by Edwin Noyes M.D. a chapter titled Mystical Herbology which gives an extended discourse on the subject of essential oils and aroma therapy. However, my books are organized so that the foundational principles of the subject of spiritism in healing are presented in the early chapters. This foundation is vital to be able to gain a clear understanding of the subjects exposed later in the book. Thus I am going to give in this document a concentrated overview of those foundational principles. If you should desire to read those early chapters, they can be obtained by going to my web site and click on “read book.” Chapters (4,5,6) can be downloaded and printed out.

Let’s be clear on one thing, oils have biochemical properties and they are not spiritistic, it is the teachings that accompanies their promotion and use that is the problem. History places their use with ancient Egypt and its sun and moon worship. Many of Hinduism’s Gods and practices came out of Egypt including the oils and aromatherapy. For thirty-five hundred years their use has been an integral part of the religion of Hinduism. What is so unique about oil that causes it to be part of a religion? We need to understand some basics of the pagan/nature-worshiping beliefs. To do so we need to go back to the tree in the Garden of Eden.

God saw that His creation was “good;” it fit into the ecology of the universe, that of others/selflessness/love. Evil, the opposite is selfishness. The knowledge of blending good with evil to reach a superior status was proclaimed by Satan through the serpent. This idea has been a part of the devils dogma ever since. Let’s look at the false story of creation set forth in ancient Babylon shortly following the flood of Noah. A counterfeit of God’s story of creation and plan of salvation arose from this center of rebellion, that of a great cosmic two sided (good and evil) force existing throughout the universe which eventually blended to ONENESS creating the cosmos, earth and man. All creation was therefore composed of this cosmic force, which permeated all creation in a dualistic state. This impersonal creative cosmic force is “god” to the pagan and has 100+ synonyms. The Chinese refer to it as “chi” and the dual aspect of chi as “yin and yang,” in India “prana” with “rajas and tamas.”

At the tree the serpent promised no death, so the concept of reincarnation was instituted. The pagan spends his life pursuing a course which he believes will bring escape from reincarnation; blending his dual state to “oneness” giving him “godhood;” and at death he moves into nirvana/spirit heaven for eternal life of bliss.

Eastern religions teach that the trek to nirvana is achieved by the physical practices of Eastern meditation, yoga, yoga exercises, diet, cleansings, essential oils and aroma therapy, martial arts, tai chi, acupuncture, etc. These acts are purported to move through and balance efficiently the dualistic cosmic life force (prana, chi) through the body. The term “essential oils” is derived from a synonym (essence) applied to this cosmic life force that is believed to be concentrated in the extracted oils of plants. It has nothing to do with being essential for our body’s biochemistry.

Consider the quotes below: 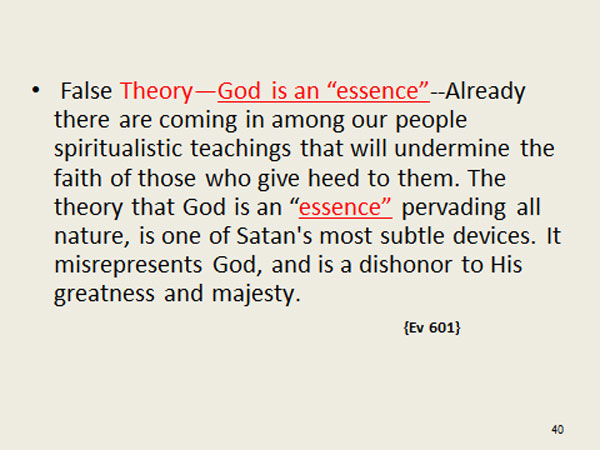 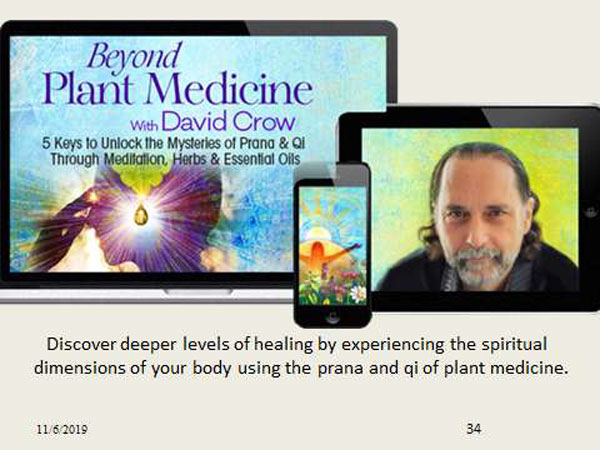 This one hour special presentation by David Crow finished by relating Prana and Chi’s origin from the
sun and moon.