Ayurveda teaches that there are seven centers of concentrated, fo­cused, universal energy in the body, which collectively form an aura, an invisible light to the “non-sensitive,” which surrounds a person. There are sensitives who say they can see the colored light of the aura. These energy centers start at the coccyx area and then are said to be located in the sacral, mid-abdomen, heart, throat, behind the eyes, and on the top of the head, all having connection to or close association with the spinal cord. A center is called “chakra,” meaning “wheel,” which can be considered a “whirling vortex” of energy. Think of a cyclone as a vortex of swirling cone shaped energy powered by hot air beneath and cold above, representing dualism. Dualism is incorporated in the explanation of the swirling energy of the chakra as being powered by doshas (rajas & tamas) to bring energy balance. Dualism is a founda­tional concept in Ayurveda and Oriental religions.

Chakras are supposed to promote and regulate the spread of uni­versal energy to the organs of the body, each center focusing on dis­tributing energy to certain organs in its anatomical area. The energy is distributed from the chakras via “nadis,” which are invisible non- anatomical channels proceeding out from the chakras to carry energy. There is said to be 72,000 nadis.

Ayurveda is founded upon belief in the universal energy theory and postulate that all living objects have an energy field outside of, and surrounding the body, which is said to influence other energy fields. Seven rays of colored lights constitute this energy field, believed to represent seven endocrine glands. The harmony and energy balance of the individual can be ascertained by observing this aura. Ayurveda also teaches that:

Every animate and inanimate substance, provided its function is not impaired, has an “aura”, which exists because of the life forc­es inherent in the natural constituents of its form. This life force, whether from mineral, vegetable, animal or human sources, cre­ates a common auric realm or plane, which is a storehouse of pure, untapped energy.

On this plane the mineral and vegetable kingdoms are constantly engaged, through their own channels of communication, in transferring their particular life force to the more subtle natures of animals and humans. Thus the aura de­picts the sum total of all these qualities and presents a complete and whole picture of the subject. 1) Hill, Ann, A Visual Encyclopedia of Unconventional Medicine, Crown Publishing Inc. NY, (1978), p. 46. 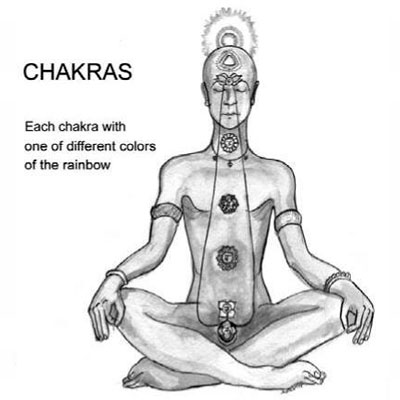 Ann Hill, in her book A Visual Encyclopedia of Unconventional Medicine, describes the aura as seven rays of the presumed human unified energy field, forming seven colors. Each individual is said to have different frequencies of these rays. She tells us that the aura can be drawn by a trained sensitive, viewing the aura, or by observing some object an individual has handled.

A sensitive of special skills is said to be able to determine a person’s mental and spiritual state as well as to diagnose illness if present, by inspection of the aura. The nature of the color, bright or dull, reveals and determines the physical condition and/or health, and also a person’s spiritual status. 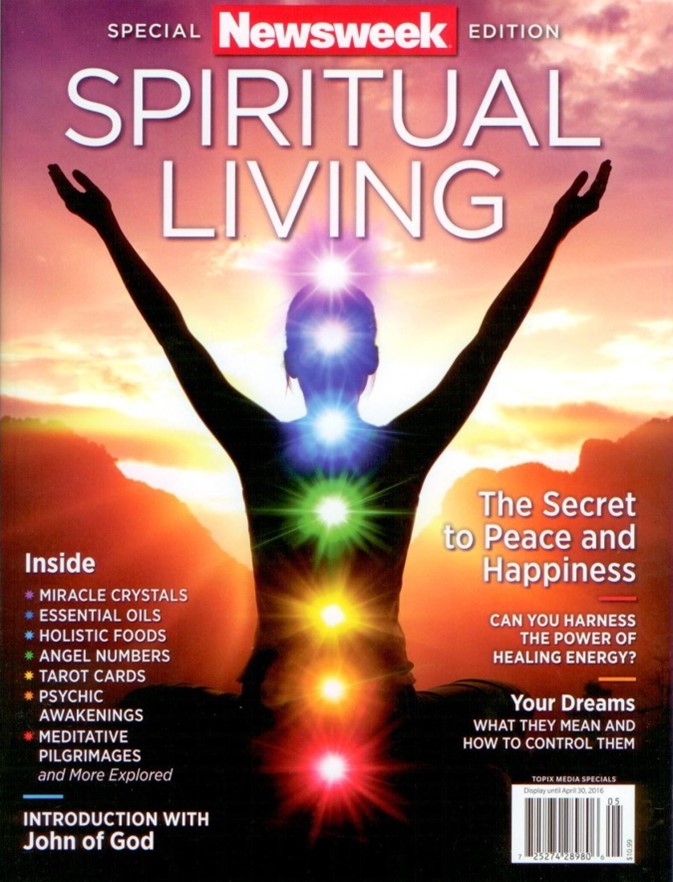 A Visual Encyclopedia of
Unconventional Medicine.

This life-force/universal-energy hypoth­esized concept is purported to exist in seven electro­magnetic frequency levels. The lowest frequency level is at the speed of light and all other levels are at a greatly increased frequency speed. This concept is not in harmony with known laws of physics that are understood today. The subject of the seven chakras is not the same as seven frequency levels.

The lower chakras in their anatomical positions are said to handle and process energy at low levels of frequency and that higher up chakras handle high frequency levels. Chakras are supposed to be able to act as transformers and convert low frequency levels of energy to higher levels, passing the energy up the chain of chakras and vice versa with the top chakras transforming high frequency energy into lower levels, passing it downward to the lowest chakra which is able to pass this energy into the physical body. 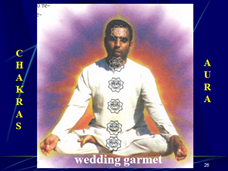 The higher frequency levels of energy are believed to come from the cosmos through the top chakra at the top of the head to be passed down the other chakras and eventually throughout the body. As a per­son is able to raise, by meditation and yoga, his subtle energies to the level of the top chakra those energies are interchanged with the energies of the cosmos. Also, plant food is believed to possess mid-level frequencies of energy; this, in turn, influences the middle level chakras. Universal energy also comes to the body via the air (prana) we breathe, which is believed to be a major source of subtle (high frequency) energy. The aura which is supposedly produced from the sum total energies of the seven chakras and emanates light outside of the body can be felt, seen, and influenced by an aura of another, by coming into close proximity, by application of hands, and with special procedures of sending energy over a distance to another person.

The root chakra (chakra # 1 at the coccyx) is also regarded as the seat of kundalini. The kundalini is symbolized as a coiled serpent within the sacral/coccygeal region. The coiled serpent represents a powerful subtle force that is poised and waiting to spring into action. Only when the proper meditative and attitudinal changes have occurred does this force become directed upwards through the appropriate spinal pathway and activate each of the major chakras during its ascent to the crown. The kundalini is the cre­ative force of manifestation which assists in the alignment of the chakras, the release of stored stress from the bodily centers, and the lifting of consciousness into higher spiritual levels. 3) Gerber, Richard M.D., Vibrational Medicine, The # 1 Handbook of Subtle‑Energy Therapies,  Bear and Co., Rochester, Vermont, (2001), p. 389.