Craniosacral therapy is another body—mind—spirit therapy quite like Reiki in its application, using a very soft touch to the head and neck area. Reiki is said to initiate a flow of cosmic energy through the therapist to the patient; however, therapists of craniosacral therapy tell us that they are correcting the clogged, sluggish, unbalanced flow of cerebrospinal fluid about the brain and spinal nerves. The disturbance of cerebrospinal fluid flow is proclaimed by those practicing craniosacral therapy to be the source of most disease and disorders of the human body. Such a concept is not recognized by medical science; indeed there is no evidence to support such a hypothesis.

At the time of the origin of this craniosacral hypothesis and resulting therapy, phrenology was popular. Phrenology was established upon the hypothesis that pressure to areas of the skull would alter the function of the brain and personality. Diagnosis was done by feeling the skull’s shape and in turn therapy for the mind, personality, and character was performed by applying pressure to specific areas of the skull. Large hoods were used to cover the head and contained adjustable protrusions (which could be screwed in or out to different lengths) and when worn, applied pressure to selected points on the head for “mind-cure” treatment.

Craniosacral therapy had its origin in the United States through William Sutherland (1873-1954), an osteopathic physician. Sutherland would have been well acquainted with phrenology which may explain what motivated him to do some strange testing. Around 1901, he ex-perimented on himself by placing belts around his head and then tightening those belts in certain positions about the head. He experienced headaches, disorientation and gastro intestinal distress from these tests. At times when he tightened belts in other positions on the head, he might feel relief and wellbeing. From this experimentation Sutherland developed the hypothesis that the cranial bones have motion one upon another and by pressure they can be moved, this, in turn, alters the flow of cerebrospinal fluid flow surrounding the brain, spinal cord, and spinal nerves, thus restoring health. He did not limit his description of disorders caused by improperly flowing cerebrospinal fluid to physical, but also included mental and emotional health. 1) http://craniocean.com/what_is_cranial.html | http://craniosacral-therapy.org/History_02.htm

Dr. Sutherland eventually sensed a power, which he called The Breath of Life that arose from within the patient without his touch as the therapist. He believed that this Breath of Life carried a basic Intelligence (he capitalized the word “Intelligence”) which the therapist could employ for delivering health. Sutherland and his associates considered the Breath of Life to carry a subtle yet powerful “potency” or force, which produces subtle rhythms which are transmitted around the body. He believed that this power—Breath of Life—came from the body’s inherent life-force itself (chi, prana, universal energy).

He theorized that the cerebrospinal fluid distributed the Breath of Life throughout the body. Dr. Sutherland took his hypothesis to osteopathic schools in the 1940’s. This new teaching was labeled “Osteopathy in the Cranial Field.” 2) http://goldbamboo.com/topic-t6725-al-6CranioSacral_Therapy.html The concept of cerebrospinal fluid flow being related to all diseases has never been verified by science, nor has a soft touch to the head been shown to alter the flow of spinal fluid. 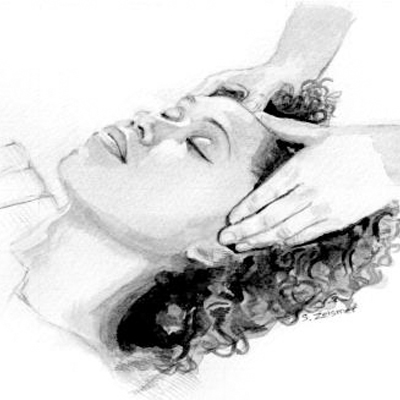 In the mid 1970’s another osteopathic physician, John Upledger, who had accepted Dr. Sutherland’s hypothesis, began to teach the technique to non-osteopaths. Upledger is actually the one who coined the term “craniosacral therapy,” as he was not allowed to use the term “cranial osteopath” for those who were not osteopaths. Dr. Upledger became the mover behind craniosacral therapy as we know it today.

Dr. Upledger added some techniques to Dr. Sutherland’s original method. One contribution is referred to as Therapeutic Imagery and Dialogue. By use of this contribution Dr. Upledger may see a response he calls Somato Emotional Release, whereby the patient and therapist can engage together directly with the patients “inner wisdom” (Breath of Life) to receive knowledge about the patient that is unknown to either patient or therapist. 3) http://larsonwellbeing.com/craniosacral-therapy

Part of the hypothesis of craniosacral therapy is that the body develops what Upledger calls “energy cysts,” which are said to be located at various locations of the body, especially in the connective tissue, such as ligaments, joints, and muscle. These so-called energy cysts are said to be the result of some unresolved physical or psychological trauma of the past, which then allow a variety of clinical symptoms to form. By use of therapeutic imagery and dialogue these cysts can be resolved, along with whatever clinical symptoms are present. Present day science has not found any of the above hypotheses to be true. 4) http://massagetherapy.com/glossary/index.php

Stan Gerome, an instructor at the Upledger Institute wrote an article entitled; Dialogue, Imagery, CranioSacral therapy, and Synchonicity, explaining imagery and dialogue. Gerome gives an illustration and the following is similar: A patient, John, being attended by a craniosacral therapist complains of pain at a point in his back which has limited his activity for several weeks. The therapist will ask if an image wants to come from that spot. John replies:

“Yes, I see a stone.” The therapist continues: what color is the stone? Answer, “It is brown.” What is its size? “It is the size of a marble.” What is its name? Answer, “Anger.” Now the therapist asks John permission to speak directly to the stone. The question is, how long have you been there, who put you there, and does this person know you are there? Answer: “I have been here for years, Ben put me here, and he does not know I am here.” Therapist: John now knows you are there, and tell us why you are there. Answer from Anger “I am here so I could protect him from events in life he did not want to admit to.” Anger, do you want to be free?

When John accepts this dialogue as truth the energy cyst is said to relax and dissolve and John’s problem of back pain heals. This is spoken of as synchronistic, where both the cyst and the physical problem resolve. What is the origin of such philosophy? Gerome credits Carl Jung (a famous spiritualistic psychiatrist) with the concept of synchronicity. Jung founded analytic psychology, and while working with people’s conscious mind, proceeded to develop the unconscious concepts of psychology. A report of a belief of Jung’s is of interest:

It appears that many of Jung’s beliefs were derived from The Tibetan Book of the Dead. It had been his constant companion ever since its first publication in England in 1927, and Jung considered its content the quintessence of Buddhist psychological criticism, an initiation process the purpose of which was to restore to the soul the divinity lost at birth….This is a very strong confession of faith in a book, the Bardo Thodol, that gives instructions to the dead and the dying and serves as a guide to the dead during the heavenly and hellish journey of forty-nine days between death and rebirth. 5) Fodor, Nandor, Freud, Jung, and Occultism, University Books, Inc., New Hyde Park, New York, (1971), p. 157.

Stan Gerome, a promoter of craniosacral therapy, in his article CranioSacral Therapy stated that he believes Jung’s concept of sychronicity is at work in craniosacral therapy. 6) http://iahe.com/images/pdf/stan.pdf | http://terrarosa.com.au/cst Synchronicity is a word Jung formed to explain connections between events or happenings that seem related. For instance if a person uses telepathy to communicate a message to someone else in a far distant location and the message somehow gets through, etc., this is synchronicity by Jung’s definition. Similarly, the illustration continues. If a disturbance of flow of universal energy through the body at some location caused a psychological disturbance in the personality, correcting the flow by whatever method would clear the personality defect. That connection between energy flow and a personality flaw is Jung’s synchronicity.

Synchronicity is best explained by understanding there are agents of Satan, fallen angels, that can influence, carry messages, and be the power in Jung’s sychronicity. Jung was a known spiritualist and also a theosophist. E.G. White warned us to have no connection to theosophy (a blend of oriental religions and mysticism), as it was, in essence spiritualism. 7) White, E.G., 13 Manuscripts Release 1.3.

In 1999, the British Columbia (Canadian) Office of Health Technology Assessment (BCOHTA) published an article entitled, A Systematic Review and Appraisal of the Scientific Evidence on Craniosacral Therapy. Their conclusion was that the theory is invalid and that prac-titioners cannot reliably measure what they claim to be modifying.

A physicist, Eugenie V. Mielczarek, Emeritus Professor of Physics at George Mason University in Fairfax, Virginia presented a paper, with the help of Derek C. Araujo, Adam Magazine, and Lori Sommerfelt representing the Center of for Inquiry, concerning the physics proclaimed by distant healers to be involved in Reiki, Craniosacral Therapy, Therapeutic Touch, Qi Gong, or any so-called distant healing. The summary of her paper follows:

Summary: Alleged distance healers justify their claimed abilities in terms of an unsubstantiated bio-magnetic field of about two milligaus emanating from the hands of certified distance healers. However, a two milligauss field strength is 18 orders of magnitude below the energy needed to affect any biochemistry. The postulate of an unknown energy field width eludes all science-based investigations and measurement, but nevertheless causes a transmission of energies large enough to affect the chemistry of cell cultures flies in the face of all micro and cellular biology experimentation and well tested theories of physics. This postulate of a medically healing energy field, which can only be generated by certain individuals, fails all test of medical science. 8) Mielczarek, Eugenie V., A Fracture in our Health Care: Paying for Non-Evidenced Based Medicine, Center for Inquiry, Office of Public Policy Washington D.C., June (2010). …

We can count our blessings in the wisdom God has shared with us through the author E.G. White.

Satan a student of the Mind. —For thousands of years Satan has been experimenting upon the properties of the human mind, and he has learned to know it well. By his subtle workings in these last days he is lining the human mind with his own, imbuing it with his thoughts; and he is doing this work in so deceptive a manner that those who accept his guidance know not that they are being led by him at his will. The great deceiver hopes so to confuse the minds of men and women that none but his voice will be heard. 9) White, E.G., 1. Mind, Character, Personality, Southern Publishing Assoc., Nashville, Tenn., (1977) p. 18.1.

Misuse of Sciences Pertaining to the Mind.—in these days when skepticism and infidelity so often appear in a scientific garb, we need to be guarded on every hand. Through this means our great adversary is deceiving thousands and leading them captive according to his will. The advantage he takes of the sciences, sciences which pertain to the human mind, is tremendous. Here serpent like, he imperceptibly creeps in to corrupt the work of God.

This entering in of Satan through the sciences is well devised. Through the channel of phrenology, psychology, and mesmerism he comes more directly to the people of this generation and works with that power which is to characterize his effort near the close of probation. The minds of thousands have thus been poisoned and led into infidelity. 10) Ibid., p. 19.