From: Exposing Spiritualistic Practices in Healing

False science is one of the agencies that Satan used in the heavenly courts, and it is used by him today. The false assertions that he made to the angels, his subtle scientific theories, seduced many of them from their loyalty to God. 1) White, E.G., Testimonies Vol. 8; Pacific Press Pub. Assn., Mountain View, CA (Now in Nampa, ID), (1904), p. 290.

The field into which Satan led our first parents is the same to which he is leading men today. He is flooding the world with pleasing fables. 2) Ibid., p. 290.

We are living in an age of great light; but much that is called ‘light’ is opening the way for the wisdom and arts of Satan. Many things will be presented that appear to be true, and yet they need to be carefully considered with much prayer; for they may be specious devices of the enemy. The path of error often appears to lie close to the path of truth. It is hardly distinguishable from the path that leads to holiness and heaven. But the mind enlightened by the Holy Spirit may discern that it is diverging from the right way. After a while the two are seen to be widely separated. 3) Ibid., pp. 290–291.

Satan desired the worship of man, and to obtain such, he subverted the Biblical story of creation. He deceived man into worshiping the power and works of God but not God. Before the flood, man worshiped nature. 4) Ibid., pp. 293–294. Shortly following the flood, nature worship again appeared as the dominant form of worship. God is proclaimed as an essence, an actuating energy, pervading all nature.

If God is an essence pervading all nature, then He dwells in all men; and in order to attain holiness, man has only to develop the power that is within him….These theories, followed to their logical conclusion, sweep away the whole Christian economy. They do away with the necessity for the atonement and make man his own savior. These theories regarding God make His word of no effect. 5) Ibid., p. 291.

The essence, the actuating energy from which the universe, earth, and man are made, according to pantheistic theories, is called by many names. Different languages, cultures, religions, and leaders in pantheistic doctrine have created a large variety of terms which refer to the same theoretical power. Nearly one hundred of these different names have appeared in print. Listed below are some of the more commonly used terms

Many English synonyms are used to refer to this supposed power. “Universal Intelligence” is a name commonly used, as is the term “energy.” I suspect each language likewise has many synonyms for this power. Listed below are several English synonyms.

In the world of pantheism there are varying descriptions as to how the energy (of which they say man is made) exists within man. The system of Ayurveda (ancient Indian healing art) describes the energy as localized in seven centers within man. These are called chakras. Man is said to have an “aura,” produced by the chakras, which is Life Force, Universal Energy (electromagnetic force to some New Age scientists) and extends outside the body. It is to this perceived energy force that many alternative healing modalities direct their focus. 6) Hill, Ann, A Visual Encyclopedia of Unconventional Medicine, Crown Pub. Inc. NY (1978), p. 46.

Macrocosm stands for the sun, moon, and stars, while microcosm stands for man. In pantheism, these two opposites, macrocosm and microcosm, must harmonize. The use of the “zodiac” was established in Chaldea to guide in achieving this harmony. 8) Bessy, op. cit. p. 67.

In the Oriental view of universal energy there are seven divisions or levels of energy. This Eastern concept is accepted by neo-paganism (New Age Movement) of today. Understanding a little about this belief of divisions or levels of universal energy will be of value in comprehending the explanations of presumed power of various techniques applied in health and healing. At the same time, we will get a glimpse of some of the theology of the Eastern religions, making it increasingly clear that involvement in their techniques in health and healing might unsuspectingly lead to acceptance of their religious precepts.

Universal energy—life force energy is said by the New Age healers to be of seven levels or planes in distribution and function. Of late, an occasional New Age scientist will call this perceived energy, electromagnetic energy, which he believes to have specific vibrational frequencies at various levels. In this concept the bottom level frequency of energy has materialized and formed the cosmos, earth, and man. Dr. Gerber, a medical doctor, who is a very prominent New Age author, tells us in his text Vibrational Medicine that the other levels of universal energy have different and increasing frequencies above the speed of light. 9) Gerber, Richard M.D., Exploring Vibrational Medicine, Sounds True, Boulder, CO, (2001), CD’s discs 1 & 2.

The different levels of energy are believed to have specific progressive influences, first on the physical body, then on the spiritual path to godhood. The second and third levels are spoken of as having subtle bodies. In the days before the development of the science of physics, universal energy—life force energy was explained by the term, spiritual power, and different frequencies of light energy (not demonstrated by science) were not a part of their explanation. 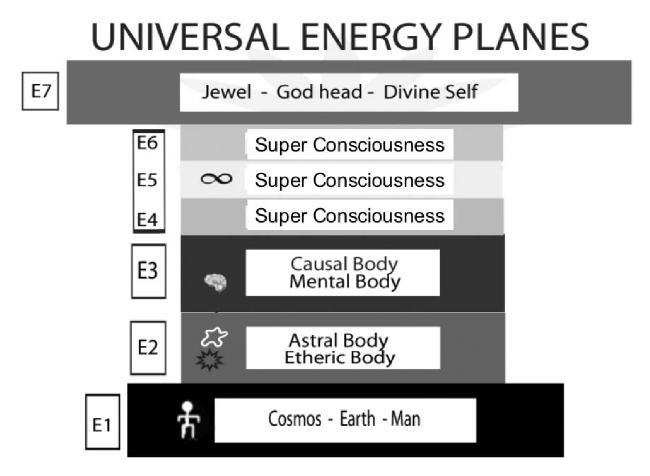 The concept is that frequency level one contains the materialized cosmos including man, and is believed to be composed of energy traveling at the speed of light. The second level of frequencies involves “subtle bodies”. These hypothesized bodies surround the physical body and are even supposed to be of different colors. The first body, etheric body, or energy plane, is said to have the function of being an “electromagnetic” template of our physical body, and is believed to be the controlling influence in the function of our physiology. When imbalance is present in the etheric body, eventually the physical body will present with malfunction or disease. Many healing techniques are aimed at correcting or balancing the status of the etheric body.

The next higher body is called astral body, which functions in the “out of body,” “light in tunnel,” and “astral travel apart from body” experiences. The third level of frequency involves the mental body, and is said to deal with higher thought processes: We then come to the causal body, which functions in re-incarnation beliefs. It is said to store life experiences from past and future lives. 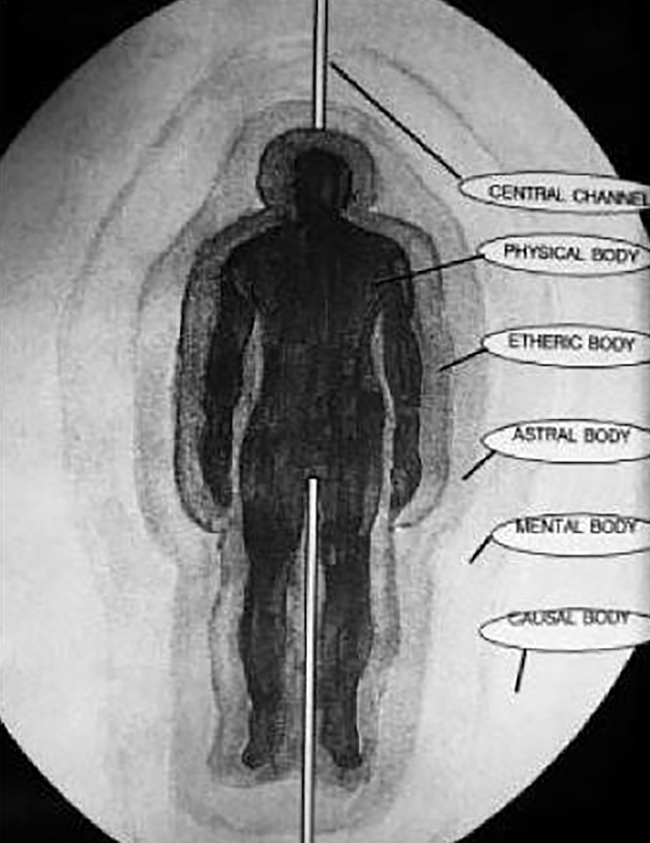 Death involves the physical body and it disappears, yet the “subtle” bodies continue on and receive the new re-incarnated body in whatever form it presents, animal or human, possibly in a lower caste, or hopefully, at a higher status.

Levels 4–7 of universal energy frequencies deal with increasing levels of “consciousness” and at the top, level 7 symbolized by the lotus flower or the Jewel, immortality— eternal life, is attained. This top level is said to interconnect with the energies of all the universe, and thus the expression all is one and one is all, or as above so below. It is at this level that immortality and godhood is said to take place.” 10) Green, Elmer and Alyce, Beyond Biofeedback, Knoll Pub. Co. Inc., Ft. Wayne, IN, (1977), pp. 299– 315.

A point of interest is the belief that plants contain higher frequency levels of energy. By consuming plants as our diet, we can obtain from them higher levels of consciousness. This is one of the reasons vegetarianism is common within neo-paganism. Essential oils are said to have high frequency and so affect the mind.

The goal of neo-paganism of the West and the religions of the East is to attain to the energy frequency level of the lotus and the jewel attaining godhood and escaping reincarnation. All religious activities are directed to this concept. Universal energy as described in this chapter is the core foundational belief of Eastern religions and in Western occultism. The religious activities are for the purpose of raising energy frequency levels from the material, speed of light level, up through the higher frequency levels and eventually reach to the Ultimate level. Illness is considered a burp, a blurb in the progress of ascending to higher frequency planes and to godhood. A multitude of acts and practices in these religions are designed with the idea that they will raise a person to the experience of nirvana. 11) Gerber, op. cit., discs 1, 2. 12) Prophet, Elizabeth Clare, Djwal Kul Intermediate Studies of the Human Aura, Dictated by Djwal Kul an ascended master also known as the Tibetan Master; Summit University Press, Colorado Springs, CO, (1974), pp. 27–31.

PANTHEIST’S EXPLANATION FOR CAUSE OF DISEASE

Illness and disease are explained in the pantheistic viewpoint as resulting from imbalance or blockage of the presence, and flow through the body, of universal energy. Therapies are designed to balance, unblock, restore, infuse, or otherwise manipulate invisible energies which allegedly exist or circulate within the human body. 13) Ankerberg, John, Weldon, John, Can You Trust Your Doctor?, Wolgemuth & Hyatt, Brentwood, TN, (1991), p. 67.

Mrs. White often used the term vital force or similar expressions in her health writings. She was in no way expressing the same concept as that of universal energy. The word essence was used for that. She referred to the normal metabolism and functioning of our body that depends upon being in harmony with the laws of health, and the proper association of our systems to pure air, sunshine, water, exercise, rest, proper diet, avoiding injurious substances, using with moderation beneficial foods and placing our trust in God by keeping His physical and spiritual laws. Under these conditions, our system will function at its best.

We have learned in chapter 4 of the foundational teaching of pantheism’s explanation of our origin, that of blending two opposing parts of an imaginary universal energy. In this chapter we have looked at the many different names given to this energy. The concept is that illness and disease result from the imbalance of the two parts (yin-yang) of energy in our system. Treatment of disease in Satan’s system is an act of attempting to rebalance the energy. In following chapters we will look at various methods devised to affect balance and/or correct the vibration of universal energy in order to bring about health and healing.

That which takes our allegiance away from a Creator God and directs our allegiance to His counterfeit, will make void the grace of Christ toward us. It makes His word of no effect. 15) White, E.G., The Ministry of Healing, The Pacific Press Pub. Assn., Nampa, ID, (1905), pp. 428–429.